In Part 17, the imagery associated with the Order of the Garter was seen concealing and revealing the sodomite gateway. In describing their peculiar hat, I wrote: “See the bright white ostrich plume as an attestation of illumination through sodomy. I'll explain the black heron feathers that represent the sodomizer in another post, Lord willing.” Here's that post. The plumage of the headdress establishes a connection between the royals of England and the Pharaohs of ancient Egypt. When we interpret the common imagery it speaks to us of their shared serpent heritage and how ritual sodomy is the secret basis of their access to power, gnosis and illumination. It also leads us to the riddle of the Sphinx. 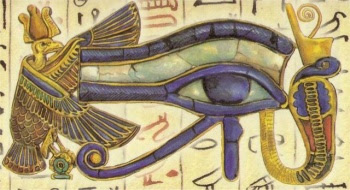 I found this image that speaks to me of the biological mechanism of the sodomite gateway. The opened third eye is pictured by the wedjat symbol, also known as the Eye of Horus. The crowned bird that resembles a vulture is the sodomizer, perched behind. The crowned serpent is the familiar serpent seen extending out from the forehead of Pharaoh's, gods and goddesses. The bird and serpent "kundalini" opening of the third eye is what the plumage of the Order of the Garter hat is all about.


“The act of sodomy is also performed to open up the victim's "third eye" which is suppose to enhance psychic ability.”

“Now these survivors have told me that the, "Key of David" is the Rothschild sodomy. The penetration occurs at an upward angle, so it strikes the nerves at the end of the spine and produces white flashes of light in the brain.”

The Master Plan of the Illuminated Rothschilds: Ron Patton interviews Marion Knox
Ritual sodomy specifically stimulates what's called the kundalini gland, which acts to stimulate the pineal gland. Some use drugs like peyote, mescaline or DMT for a similar experience, but ritual sodomy is the preferred means that appears to have no real substitute. There is a powerful ritual sex magick that was practiced by the ancients and is practiced today, which still manifests a powerful transformative supernaturalism.

I've presented the following in an earlier post but it certainly bears repeating in this context. 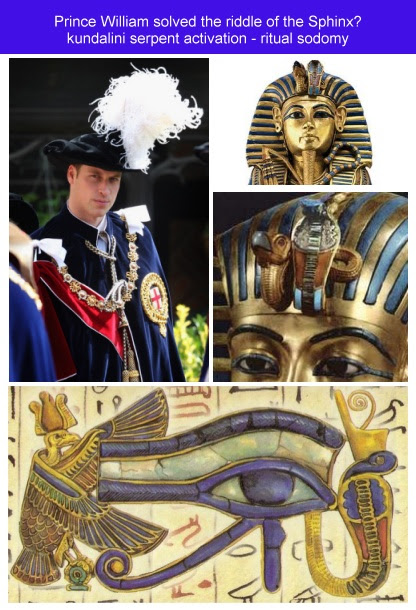 I believe the image of the bird-wedjat-serpent illustrates a primary solution to the riddle of the Sphinx. Notice how the bird and snake are crowned, signaling royalty. This is the secret of royalty, of the power of the ruling families of the world. This collection of images presents Prince William wearing his Order of the Garter apparel. His version of the Pharaonic headdress has a symbolic white ostrich plume. The Pharaoh's illumination is pictured by the serpent head (kundalini + pineal activation), plus the radiant alternating rays of gold and blue, plus the Horus Eye makeup. The Pharaoh conceals and reveals the sodomizer who exercises the power to illuminate with the bird head next to the serpent. That's the bird behind the open third eye, the Eye of Horus. The Order of the Garter version of the headdress worn here by Prince William represents the sodomizing bird with the black heron feather plumage.

In the Bible, serpents and birds of the air, most particularly unclean birds that eat carrion, are symbols of the devil and demons. You can compare the bird of the bird-wedjat-serpent to this vulture, linked here. It's a match. However, I think the more important identification is as a Benu bird, with an ancient Egyptian connection to Osiris. The black heron feathers of the Order of the Garter hat link to the Benu bird because the Benu is represented as a grey heron, which has black head plume feathers.

“In the Book of the Dead from the New Kingdom, however, the Benu is represented as a grey heron (Ardea cinera), with two long head plumes and a straight beak. Though primarily associated with Atum and Re, the resurrection aspect led to an association with Osiris and the heron was sometimes depicted wearing the 'atef' crown.” (The Benu Bird of Iunu (Heliopolis) - The Prototype Phoenix)

The bird perched behind the Wedjat wears the atef crown.

Being able to connect the royals of today with the Egyptian Pharaohs and identify their common sodomite imagery goes far beyond merely scandalous sexual activity. The graphic evidence illustrates the continuity of the serpent's antichrist plot that began in the Garden of Eden. It touches on the Illuminati, every shadow government through history, Nimrod and the Tower of Babel, the Beasts of Revelation 13, Mystery Babylon the Great, MK-ULTRA, the black awakening, Hitler's Third Reich, the mark of the beast, the dominion of the British Empire... While it may sound like a huge stretch to assign such importance to the royal secret of the sodomite gateway but this is how mind control and demonization of the ruling class has been done for a very long time.

Here is another excerpt from the page about the Benu bird.


“The Benu was one of the manifestations of the creator god at Heliopolis. Like him, the Benu was imagined as being self-created, in mythological papyrii from Dyn 21 he is described as 'He who came into being by himself'. He emerged out of the original darkness before creation to be: '...that breath of life which emerged from the throat of the Benu bird, the son of Re in whom Atum appeared in the primeval nought, infinity, darkness and nowhere.'

By the cry of the Benu bird, existence was announced as coming into being. The silence of the primeval night is broken and light and life is brought to creation.

This is no minor deity but, to quote Rundle Clark: "the herald of all things to come" and an aspect of the creator god himself. From the 'Isle of Fire', the mythical place where the gods were born, beyond the limits of the created world, the Benu comes flying. And the place where it lands becomes the symbolic center of the earth - Heliopolis. On the sarcophagus of the God´s Wife of Amun, Ankhesneferibre, (British Museum) the Benu is perched on a sacred willow tree in the temple.

There are depictions of the heron perching on a cliff or a little piece of land which is rising above the flooded waters. In this way it became an adequate image of life emerging out of the primeval waters at the first time of creation, just like the sun was said to do, and thus symbolising rebirth. This piece of land was called the 'ben-ben' stone, and as the place where the heron landed at the time of creation, it became the sacred stone of Heliopolis. It is seen in the hieroglyph with the sitting heron (G32).”

The Benu Bird of Iunu (Heliopolis) - The Prototype Phoenix
The Benu bird brings light and life. This is why the black heron feathers appear on the hats of the Order of the Garter. The Benu feathered hat tells us the British royals are today's Pharaohs. It conceals and reveals that those of the Order of the Garter share the secrets of heaven with the ancients, worshiping the same gods in the same ways. 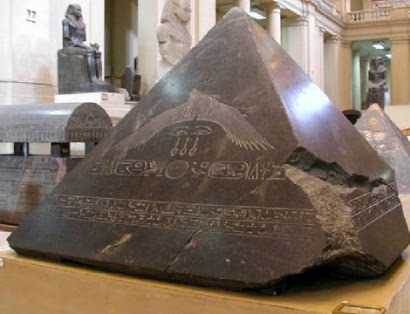 Here is the famous pyramid shaped Benben stone on which the Benu landed, with featured winged sun disk (Egyptian Museum, Cairo). The Benben was believed to be the very seed of Atum-Ra, creator. The word "benben" means, "to copulate." The pyramid cap on an obelisk is called a Benbenet. You know that's all about sex magick, right? The magical work was performed through the agency of Isis, and the work was to bring forth Horus. Ultimately, that's the plan, with Horus being also known as Apollo or Apollyon, the Beast John sees coming out of the sea in Revelation 13:1. 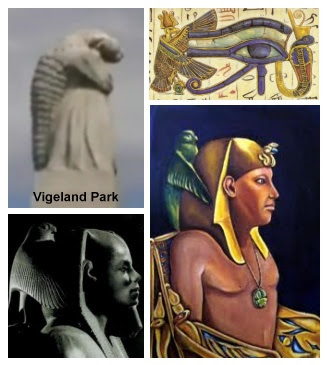 Here's some images of the Benu bird. The bird symbolizes sex magick, bringing illumination and power to an individual through which the archon demonic regents work to eventually incarnate the serpent's counterfeit messianic bridegroom, the Horus Beast. The Benu and Benben are symbols of the Osiris / Isis / Horus generation and ascension.

One image is from Vigeland Park, in Oslo, Norway. The artist had an obsession with presenting what he envisioned, and I believe he was enlightened in the sodomite way. His figure represented here appears tightly embracing a pregnant woman from behind, with his serpent tail appearing from underneath the front of her gown and coiling under her belly. He is a feathered and winged serpent.

The bird is also the sodomizer, "owning" the mind and body of the sodomized with full control; a shadow government, essentially. 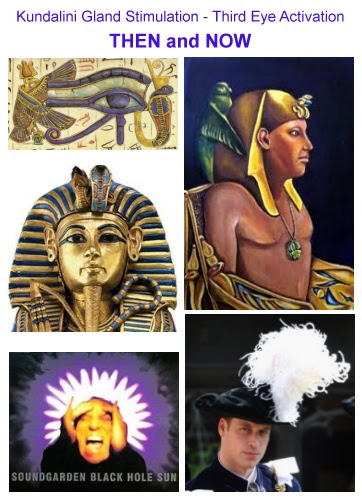 The bird is Isis, fanning her wings to bring the regenerative power of Osiris, and produce Horus. This is the sex magick of Isis and Osiris and the kundalini and pineal activation that the sodomite gateway opens. That's how it was done before, and that's still how it's done.

Kundalini, the feathered and winged serpent god Quetzalcoatl, Kukulcan, Gukumatz, Viracocha, the nachash (biblical serpent - related to the flying angelic seraph and cherub), the vision serpent, the winged dragons of the Orient, St. George's slain dragon; these are all related to the Benu. It is the phoenix at the center of the tapestry in the U.N. Security Council Chamber. The Benu bird (phoenix) and Benben stone are essentially linked to the sex magick of the sodomite gateway as the secret to the royal power, control, gnosis and illumination, and it is an essential element in the sex magick that serves to ready the day of the dawning of the antichrist Beast.

Of related interest:
Awakening of Kundalini - Vopus
The Pineal Gland : A Stargate To Time Travel
Bob Schlenker at 4:31 PM
Share