As the Lord continues to open to me the secrets of Masonic symbolism, the sets of imagery now appear to me as a collection of esoteric Rosetta Stones, layered symbol sets that are useful for getting the redundant elements to yield their shared meaning. Warning: If you are a trauma-based SRA mind-control victim and still have to be mindful of triggers, you may want to skip this post and move on without going any further. 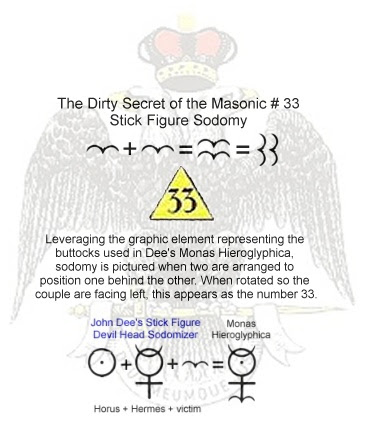 If you're disturbed in any way by descriptions of sexual imagery, please give a similar consideration. This is material fit for the healthy and mature.

I'll demonstrate how sodomy can be said to be the Rosetta Stone of esoteric Freemasonry, Illuminated brotherhoods and secret societies by building upon several of the symbols I've already decoded to expose the meaning of the mystical number 33, the double-headed eagle and the trowel.

The number 33 has been researched extensively by many students over many years and assigned meanings in a wide variety of categories, and while I don't recall anyone connecting it with sodomy, it is, and the spell cloaking it has been potent indeed! Leveraging the graphic element representing the buttocks used in Dee's Monas Hieroglyphica, sodomy is pictured when two are arranged to position one behind the other. When rotated so the couple are facing left, this appears as the number 33. 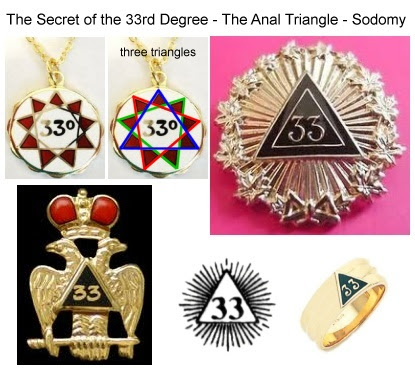 Masonic pins, rings and pendants are Rosetta Stones in miniature, with those pictured here illustrating the sodomy message through the “anal triangle” (the portion of the perineal region surrounding the anus - see Part 23) with a 33 inside, the graphic of the engaged couple as a minimalist overhead view, facing left. In this collection of images, some of the other sodomy symbols layered in are the pucker-rays portal illumination and royalty. The triple-triangle establishes a “9” Beast triple-helix transformation element that matches to the black stone. The triangle inside a triangle seen in the pin may be a man-inside-man signal, similar to the pederast signaling spiral of the BLogo's pair. 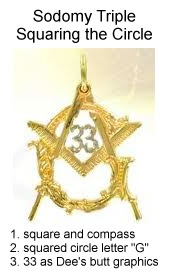 The pendant pictured here identifies the 33 with squaring the circle placing it inside the square and compass, and at the same time, the squared circle letter G. It's another Rosetta Stone!

The 33 identified with the Insignia of the 33rd Degree of Scottish Rite Freemasonry is pictured inside a triangle that's positioned either central to the figure or up above the crown, like on the cover of Albert Pike's classic, Morals and Dogma. 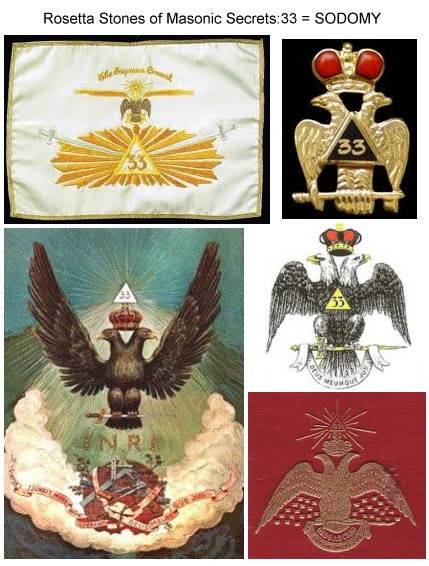 The 33 inside the triangle is a legitimate substitute for the eye sometimes found inside because the message is equivalent, testifying of the sodomite gateway. It's also like the glowing eye on the pyramid of the Great Seal of the United States of America. Set above the crown, the glowing 33 triangle is as the crown chakra, lit up through the kundalini gland / pineal gland activation, the ritual sodomy referred to as the Key of David. This crown as a symbol of royalty represents the authority of Lucifer.

The Eagle has long been identified with Zeus, aka Lucifer. It is equivalent to the phoenix and a feathered serpent, and also signifies Apollo / Horus as the god-man, two natures in one, the fusion of the heavenly and the earthly. The sun yellow triangle with the 33 inside set centrally is the binding core between the dual natures as a kind of keystone of the arch, a cornerstone of the union that is unmistakably sodomy, without which this work does not exist. 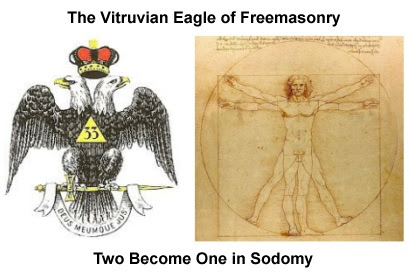 What I am calling the Vitruvian Eagle is the double headed eagle. This pair of images is presented for comparison as equivalents. Titled, The Vitruvian Eagle of Freemasonry, this illustrates how Da Vinci's method of obfuscating the activity concealed and revealed in the Vitruvian Man drawing works just as effectively in the esoteric Double Headed Eagle. Da Vinci presented an image of what appears to be one man in two poses, with one head and torso and two sets of limbs. The eagle appears to be one bird with two heads. As I have already described in an earlier post, the Vitruvian Man is actually encoding two men, engaged in sodomy. The one in the passive role is in the female circle and the man in the active role is in the square, carefully not revealing that the secret of squaring the circle is sodomy. The double headed eagle is just like that but is revealing the secret of the 33, presented inside the anal triangle with the Luciferian light of the antichrist sun. If we were to change the perspective of these models by rotating out of the frontal view, the reality of one behind another would appear. If we were to take an overhead perspective on these two esoteric images, rotating then in another plane until the pair engaging in sodomy faced left, the outline of their buttocks would form the 33.

I subtitle that striking comparison, Two Become One in Sodomy. A 3 and 3 are joined together to form a 33. When the two numbers become a 33 it expresses a value greater than 6, the sum of 3+3, and greater than 9, the product. The 33 thus expresses the bonding of the individuals that is a supernatural binding, one that transcends anything natural. This bond is an essential feature leveraged by those who use ritual sodomy to accomplish their goals. 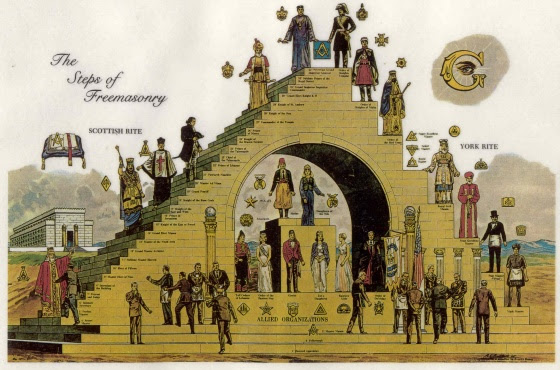 This is why we see two men at the top of the Steps of Freemasonry pyramid, both holding the banner bearing the image of the tools for squaring the circle with the squared circle letter G inside. These members had formerly been individual threes but through the ancient rites have attained the 33rd Degree, joined as one in becoming a 33. This is the hidden testimony of the Masonic 33, and why there is no higher numbering bestowed within the order. In becoming 33, you have fully arrived.

There's an interesting comparison, the back of the one dollar bill and the Insignia of the 33rd Degree of Scottish Rite Freemasonry. How likely is it that the Federal Reserve and those behind the Great Seal are not in on the secret of 33?

What do you suppose Walt Disney had in mind when he made the members-only Club 33 at Disneyland? According to the introduction on an unofficial Club 33 site, 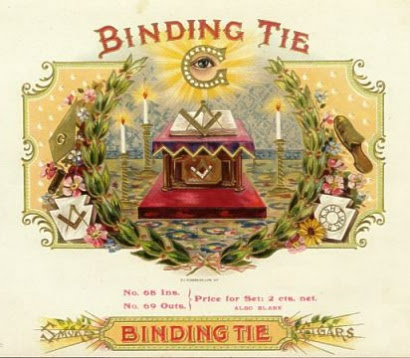 “Presidents of the United States, leaders of foreign nations, dignitaries, actors, and business leaders from around the world have all enjoyed the club.” Well, that does fits the profile.

This feature of the 33 testifies of the same essential dynamic as the red cross emblems, where two blood streams or lines and lives are joined at their intersection. The nature of the tie that binds the sodomites together is put on exhibit on this cigar box featured at right. The binding tie is the key to maintaining the secrets of their order, and the key to their ability to function in the secret power of lawlessness, the mystery of iniquity, the mysterion anomia of 2 Thessalonians 2:7.


The binding agent between bricks and stones in the construction trade is called mortar, mud. This provides a fundamental symbol and metaphor for the tie that binds the sodomite brothers together; the trowel. If you survey the images on the “Rosetta” cigar box, you'll find one in that set of messaging symbols, marked with a “G.” Works of masonry are built with stones and Freemasonry is built with living stones, comparing as a counterfeit to the Temple of God that is a spiritual house.


4 And coming to Him as to a living stone which has been rejected by men, but is choice and precious in the sight of God, 5 you also, as living stones, are being built up as a spiritual house for a holy priesthood, to offer up spiritual sacrifices acceptable to God through Jesus Christ.
1 Peter 2:4-5

The trowel is the tool used to apply the mortar that binds bricks and stones together. The Masonic trowel represents the work of ritual sodomy as their essential tool, worked to bind the living stones together for the offering up of spiritual sacrifices to their god, Lucifer. It's used for the application of mud between them, to use a relevant scatological metaphor.

The following declaration is featured on themasonictrowel.com.


Freemasons use a special trowel in public dedication ceremonies where they set a cornerstone. This magickal working represents a binding of the brotherhood to their messiah, their god. This ritual work dedicates the construction project to their god with a demonic curse that claims it as his domain.

The trowel is seen in contexts of esoteric Masonic imagery with the redundant messaging of a Rosetta Stone, among symbols of like kind that make the interpretation pretty obvious. 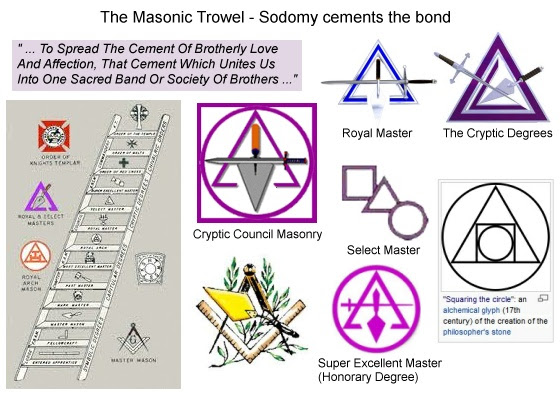 Again, the essential element is sodomy, but with the trowel an emphasis is placed upon the keeping of the secret of this binding agency, apparently by means of physical force, a "concrete" sword, and by the sorcerer's "sword," words of magickal weaponry. According to the Council of Cryptic Masons: “Without the Royal and Select Master degrees, neither the Master Mason degree, nor the Royal Arch degree is complete. These two degrees account for the concealment and preservation of the treasures revealed to the candidate in the Royal Arch degree.” (York Rite - Nevada -- See also The Cryptic Degrees of the York Rite ) There is more concealed in the Cryptic Degrees and kept under guard beyond just sodomy, but that's as far as I go in this post.

What things I reveal in this series are well kept secrets. It's a big deal that the Lord should ordain this work of revealing in this hour! The number 33, the double-headed eagle, the trowel; these can now be added to your expanding vocabulary as you interpret the esoteric symbol language of the illuminated brotherhoods and the Lord reveals the meaning. Their Luciferian story of rebellion is unfolding all around us. They sit in the seat of power. Their season is drawing to a close, yet, what the sovereign Lord has ordained in granting that they should rule has not yet been brought to completion. Soon enough, their end will come. Until then, focus intently upon what the Lord has for you, personally. Pray and act as the Lord directs, engaging as the Lord Himself engages you, at times and in ways of His leading. In this, success is assured, and the Lord of Glory will show forth His favor upon those who love Him!
Posted by Bob Schlenker at 1:30 PM