For another illustration of the link between royals and sodomy, here's a packaging of the royals, the sodomite gateway and kundalini-pineal activation together.

Most obviously, this logo is a fallen angel promotion because the star-as-angel metaphor is in play; the event is an All*Star Game. The stars on top (see mini-series from Oct-Nov 2010) of the crown suggests the magick of a royal court magician. 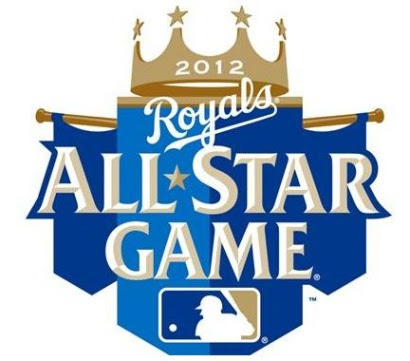 The letter A in GAME is a truncated pyramid with a 5 point star floated above it as the capstone. The letter R in Royals is the popular stylized Horus Eye. The letter A in ALL balances opposite the R in STAR. That A is for Apollo and the opposing R is a Horus Eye. R*oyal A*rch? Royal *AR*ch? The crown conceals three royal arches, upside down.

The S in STAR is central, assigned a prominent position, and it touches the y in Royals to declare it as the serpent Satan's y chromosome. That's what's pictured as being crowned, the S+y, revealing that the serpent's male offspring is The Royal. Three banners signal the triple helix DNA of the Beast and mark of the Beast. The crown is brown (What can BROWN do for you?), and the ellipse formed at its bottom with the white inside is an illuminated eye of Horus. The hole in the brown crown presents the sodomite gateway for the serpent's seed. That y of Royals has the serpent tail from the s of Royals passing through the loop, the male hole down under, as a sodomy signal. The squaring of the circle is a sodomy signal leveraged by the G of GAME and by the alternating round-flat design of the crown. It's also leveraged in the rounded square or squared circle framing of the baseball batter and ball. Here's where they solve the riddle of the Sphinx, or the sphincter.

Here's what's really clever. In the negative space, the brown part is the horn of plenty of the Masonic Royal Arch tracing board. That's the G EYE tract, remember? The blue negative space is where the kundalini-pineal activation is concealed. The brim of the helmet is the eye socket indentation of a face in profile. The batter's shoulder is the wide open mouth. The white baseball is the pineal gland. The extension of the blue over the batters head is the head of the serpent, extending out from the forehead.

Elton John, the famous sodomite, was elevated to royal status (a Queen) when he received a knighthood from HM Queen Elizabeth II for "services to music and charitable services" in 1998. 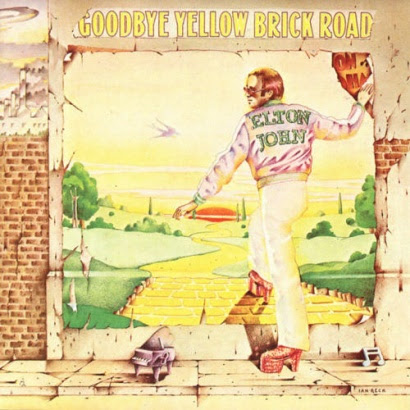 He became Sir Elton Hercules John, CBE. His most popular work was titled “Goodbye Yellow Brick Road.” Like Soundgarden's Black Hole Sun, the title song of that album is a sodomite anthem, and that observation is going to provide us with some insight into more sodomite symbolism. Read the comments made about the song's lyrics by Planetdrum, Sant Cruz, CA and Randy, Lexington, KY and William, Syracuse, NY. here at this link. Goodbye Yellow Brick Road was released in October 1973. What many consider to be the pinnacle of his work was released in May of 1975, titled Captain Fantastic and the Brown Dirt Cowboy. It's considered biographical, descriptive of the relationship between Elton "Captain Fantastic" and his lyricist, Bernie Taupin, "The brown dirt cowboy."

The lyrics of this verse from Captain Fantastic and the Brown Dirt Cowboy refer back to the lyrics of Goodbye Yellow Brick Road, validating the comments I recommended from songfacts.com.


While little Dirt Cowboys turned brown in their saddles
Sweet chocolate biscuits and red rosy apples in summer
For it's hay make and "Hey mom, do the papers say anything good.
Are there chances in life for little Dirt Cowboys
Should I make my way out of my home in the woods

Disgusting. What we learn that is of value from this is how sodomite Elton John leverages imagery from the Wizard of Oz, which is famously used for MK-ULTRA sodomite mind-control programming. Sodomizing SRA victims causes multiple personalities to split. They are encouraged, forced, really, to dissociate during the severe abuse they are subjected to. They go "over the rainbow" to where they no longer emotionally connect to the helpless state of the abused. They go down the yellow brick road to Oz. The dissociation caused during sodomy is used for opening of the third eye, transport to Oz. You get there by magickal assistance. The Professor Marvel helped Dorothy, who practiced divination by scrying in the crystal ball. Dorothy was directed by an illuminated witch when she arrived in the world of color, to see a wizard who knew things (gnosis, illumination). That practicer of witchcraft directed her to follow the yellow brick road to Oz. Oz is a reference to Australia, the land down under. This is an anatomical metaphor.

The album cover of Goodbye Yellow Brick Road shows Queen Elton stepping into a poster on a wall, going through a magickal portal from a bad place to some fantasy place. You're catching on to the sex magick of the royal sodomite gateway, right? While the sign says "goodbye" it really means, hello, doesn't it? See the Masonry of the brick wall, partly covered by a failing veneer? Freemasons. It is a yellow brick road, right? Elton Hercules John is taking the Apollo or Horus Highway, a golden path to the rising sun in the east. It looks like a left hand path to me.