Monas - Hidden Meaning of McDonald's Golden Arches, and the Great Seal of the United States

I had long pondered the meaning of the famous golden arches promoting McDonald's, home of the Big Mac. I had a few ideas but it didn't really settle until I saw where someone showed letters of the name under the arches, parsing McDonalds as suggested by the form into monas. Then it came together. Whoever did the graphic unscrambled the word to an anagram, mason. While that's certainly valid, the direct derivation of monas really spoke to me because of Dr John Dee's alchemical glyph, the monas hieroglyphica, which testifies to the same theme I perceived in the graphical golden arches; the sodomite gateway. 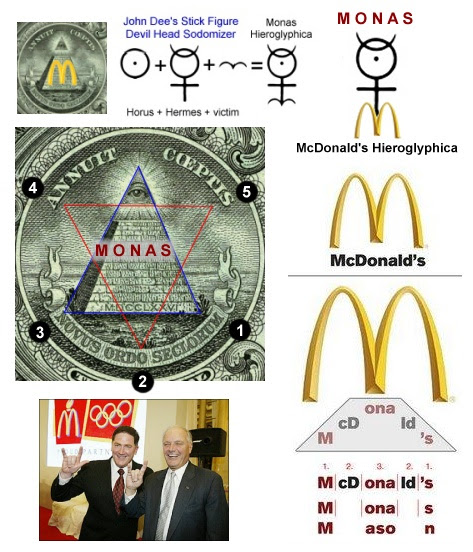 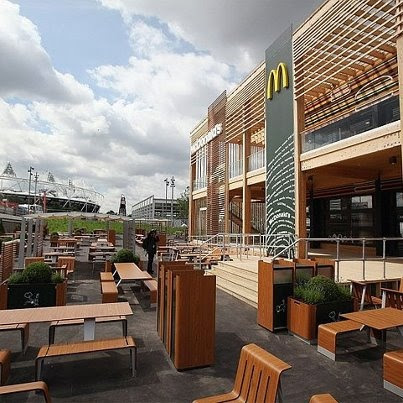 Uh, hey! Do you want fries with that? The Baphomet hand signals celebrating the partnership with the London Olympics are furnished by McDonalds board members Doug Goare (President, McDonald's Europe) and Steve Plotkin (West Division President - McDonald’s USA) (if I've identified them correctly). The temporary facility pictured here in London's Olympic Park is at present the largest McDonalds in the world.

I understand the golden arches as a symbol of the sodomite gateway. The letter "m" is the simple graphic form of a male backside, another in the collection I've presented recently. As arches, the basic elements compare to the royal arch of Freemasonry, a squared (sides and bottom) circle (arched top) sodomite gateway symbol, and the joining of heaven (arched top) and earth (the bottom on the earth). You could say the letter M is for Mason, (Masonic McDonald's Golden Arches Logo) and Monas. As the 13th letter of the alphabet, it does duty as a rebel lord Beast signal, a key esoteric meaning of that number. If you rotate many of the McDonalds logo versions clockwise 90 degrees, a 13 appears, with the golden arches forming the 3. From many of those versions, the string Monas can be parsed, as suggested by the positioning of the elements. 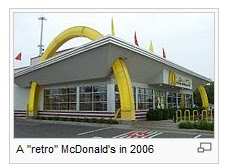 The golden color alludes to the sun and symbolizes the god Apollo, Horus. It is also the alchemist's MacGuffin, you might say, the golden light body of the transformed.

This early style McDonalds restaurant illustrates the style with all the customer interaction happening between the golden arches, a sun worship temple between the portals.

By definition: Monas - a singular metaphysical entity from which material properties are said to derive. 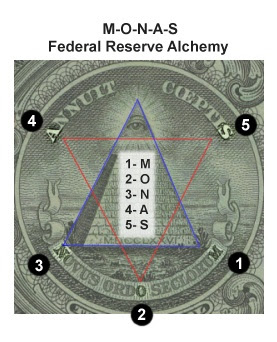 My take on it is that monas is on one level the equivalent of Baphomet, the merging of man with the gods and of the genders that counterfeits the first Adam, when he was in the initial state as created in the image of Elohim. Dee's Monas Hieroglyphica expresses most simply the transformational act of sodomy, which was first performed in the Garden of Eden with the serpent-nachash and Adam and Eve in a bid to merge mankind into one in his image, ultimately replacing Elohim's creation and displacing Elohim.

The monas-mason connection prompted me to give some more consideration to the great seal on the back of the dollar bill, which has been decoded in a couple ways to derive the word “Mason.” I haven't found the versions entirely satisfying, including the one insisted upon by Doc Marquis. I believe the more deeply hidden esoteric embedding is that of monas, which is more directly derived by the tracing of the implied hexagonal star.

Are the American institutions of McDonalds and the Federal Reserve all about the monas? Until you get hold of how the symbols conceal and reveal what's really going on, it seems dubious. 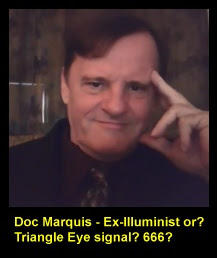 When you can read between the lines of what they say and do, and interpret and accept the witness of the symbols, it becomes rather obvious.

By the way, I believe Doc Marquis is a shill. This picture from the Future Congress site (A conference I attended exactly one year ago, as I write) has him presenting a sly pyramid eye + 666 signal. Reformed and on my side? I don't buy it. I engaged him very briefly in conversation one-on-one while in Branson last year, asking a pointed question and getting a, well, interesting, response. Shill. He claims to be a converted-redeemed Illuminati witch, seventh generation. Shill. Filtered info = disinfo.
Bob Schlenker at 11:38 AM
Share