The Secret of the Rain Man (god is in the rain) 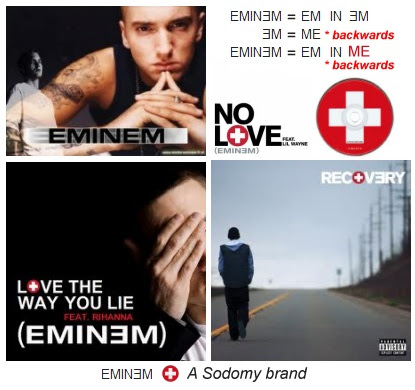 During the course of eight posts exploring the symbolism of the classic song and dance scene from Singin' in the Rain what must be acknowledged as a series of lessons about Illuminati programming came into view. Hollywood films have been Illuminati programming vehicles from the beginning. The music industry is no different. The folks in the entertainment industry know how to do evil and spread it through their craft. Many of them practice witchcraft, and many are SRA handlers, slaves or programmers. Usually, their work in the very public domain is subtle, but sometimes, not so much.

Caveat: If you're a victim of ritual abuse who is still being delivered or you're easily offended by mature subjects and descriptive language, please move on. If you're new to this blog, welcome! If you want a good foundation for symbolism, here's one place to start, Series Links: The Sodomite Gateway, but starting here at the beginning may be much more helpful.

Here's an example where the infamous rapper Eminem graphically clues us in on the rain metaphor. (Part 33 - The Sodomite Gateway - Eminem = EM IN *ME, backwards*)

...I gotta question if I may? (Yeah)
Is it gay to play Putt-Putt golf with a friend (Yeah)
And watch his butt-butt when he tees off? (Yeah)
But, but! I ain't done yet
In football the quarterback yells out hutt-hutt
While he reaches in another grown man's ass
Grabs on his nuts but just what if
It was never meant it was just an accident
But he tripped, fell, slipped and his penis went in
His teeny tiny little round hiney but he didn't mean it
But his little weenie flinched just a little bit
And I don't mean to go in into any more details but
What if he pictured it as a females butt?
Is that gay? I just need to clear things up
Till then I'll just walk around with a manly strut because...
[chorus]
Cause I ain't got no legs!
Or no brain, nice to meet you
Hi, my name is...
I forgot my name!
My name was not to become what I became with this level of fame
My soul is possessed by this devil my new name is....
Rain Man
Eminem's rapping about the sodomite promotion, being literally “possessed by this devil.” Of course, he doesn't just come out and state everything plainly. The game is to sing and dance all around it every which way. He's a bottom and top, a slave and a handler. He's got the Horus Eye illumination and he pays it forward with a manly strut like Hermes the rooster.

Who's got no legs but the serpent who crawls on his belly? The chorus is riffing off the Rolling Stones classic, “Sympathy for the Devil.”


“Pleased to meet you
Hope you guess my name, oh yeah
Ah, what's puzzling you
Is the nature of my game, oh yeah”
Between the title and the line, Just call me Lucifer, there's no doubt about the subject there. Neither is there any doubt about Eminem's cryptic message about the Rain Man being the Devil's sodomizing proxy.


“Basically, Satan cannot sodomize someone on his own, but he can influence somebody to sodomize someone else and then it’s like having Satan sodomize them and put the sodomy power within them.” (Marion Knox - Interviewing Deprogrammers: In the House of the Strong Man Sodomy is the Key)
One of the lines of Rain Man evokes what is dramatized in the Illuminati programming classic, Singin' in the Rain. “Hence if I should draw a line on any fences.” At the setting of the Richard Carlane Music Studio, Don runs the umbrella across the fence, perhaps as drawing a line on a fence. That scene pictures Gene Kelly as a mob Don, smuggling and sex trade trafficking, using a fence or middle man for black market exchanges. (Part 99 - The Sodomite Gateway - Organized Crime's Don Stars in 'Singin' in the Rain')


“Hence if I should draw the line any fences
If so to what extense if
At any, should I go? 'Cause it's getting expensive
Being on the other side of the courtroom on the defensive”
Is the drawing of the line to mark a drop or pickup? Is it a reference to limiting the risk involved by setting limits? Just wondering. The fence and trafficking for SRA is a big deal, there's no doubt about that.

A fence appears in Charles Dickens' classic, Oliver Twist. The character named Fagin is a fence who recruits homeless boys and trains them as pickpockets.

Eminem's graphic lyrics present us with a fairly obvious metaphor of the rain as Devil semen. The Master Counterfeiter understands the genuine symbol, how the waters of the flood of Noah's day represented the seminal fluid of the Creator (which I explained in 2008 when writing about the Occult symbolism presented during the London Ceremony at the close of the Beijing Olympics). Those who are Illuminated know plenty, and they have been telling us what they know for a very long time.


We hear the expression, “god is in the rain,” in the film “V for Vendetta.” You can hear it in this clip that also includes the essential context:

V for Vendetta - God Is In The Rain. The experience of illumination through ritual sodomy is considered as a counterpart to the Christian's new birth in Christ. Her experience of the epiphany, observing that god is in the rain is equated to V's rebirth in fire. She had just been imprisoned and abused, tortured and traumatized. V was her abuser, who had himself been traumatized and illuminated, turned into a supersoldier. The mask V wears represents an alter because he is a multiple. He was an SRA slave and lab rat for virus and vaccine development. He became Evey's handler, and she was traumatized and illuminated through ritual sodomy. V was her Rain Man. “Evey,” is like Eve, you see, becoming like a god knowing good and evil. Notice how she has been completely defeminized, ungendered, or masculinized, like a hermaphrodite.

So, god is in the rain, in the semen of Satan's proxy. The Rain Man is a god man like Horus.

Evildoers flaunt their esoteric knowledge and boast of their predation. You might expect it in the entertainment industry, but it's everywhere symbols are found, including in the symbolic expressions common in our language.