It was an announcement that was not very unlike this one that, way back in May of 1991, led me fairly directly into the discovery of a celestial sign and subsequently into learning the chronology of the end times. 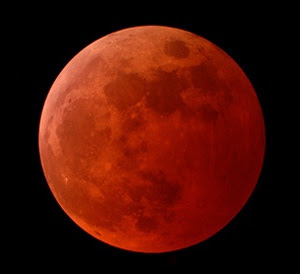 How to Watch the Longest 'Blood Moon' Eclipse of the Century "The record-setting lunar eclipse paired with an extra-close Mars will soon have sky-watchers seeing red."

"One night, while I was working at a client's house, their T.V. was on and during the dinner hour news I overheard that there was an interesting celestial display in progress. The weatherman said there would be three bright planets doing an inversion of order just after dark in the western sky. I had just bought my first computer and had installed an astronomy program. With it, I was able to view the heavens as they were at any given time in history and as they are expected to be in the future, if they continue consistently. When I got home from work, I used the animation function to set the planets in motion and observed their positions relative to each other and against the backdrop of the stars. By means of this simulation, I previewed on my computer the events I would see in the heavens over the coming months. It was just as the weatherman had said. Three planets were lined up. The slowest one was in the lead and the fastest moving one was behind the slower two. Eventually, in mid June, the three planets came really close together, bunching up in the constellation Cancer. Then the fastest one passed the other two and moved out front, while the slowest one dropped into the last position. They were inverted. This was fascinating to me and I watched the animation several times. As I let the animation run on through the summer months to see if anything else interesting was going to happen I came to a startling realization! On my monitor there appeared a familiar configuration, a massing of the planets Mars, Mercury, Venus and Jupiter in the Zodiacal constellation Leo!" -- Read more here: Jacob's Dying Words Prophesy the Celestial Sign of the Lord's Return in Judgement

What does this blood moon and brightening of Mars mean? War is coming - according to the traditional conventions of interpretation. The spiritual war has been ramping up, and we're entering into a season that, if it were not for time being skewed, would be cause enough for many to be terrified. On the earth, it may be said that war drums have been beating. But time itself has been skewed, and we have no insight to offer about what this celestial event may portend, since no revelation has been received about it.
Posted by Bob Schlenker at 11:40 AM 1 comment:

(This post was formerly titled, "Part 25 - About the Schedule of the Pending Reset of Time")

The sixth installment in the video series was just published. This one was a long time in the works. This follows up on the sign featured in the last video, which was witnessed on June 22. Because of the abundance of signs and their nature, this project of sharing them has been quite an effort - and has yielded much fruit!

If you're new to this material, it won't make sense apart from the foundation it depends upon. See the studies in the collection titled, When Cometh That Thief in the Night. There are plenty of videos and mp3 audio.

The Showtime series, Jeremiah, ran from 2002-2004. Like many shows, there's an esoteric layer, and for us, now, this one is pretty special. The episode titled, City of Roses caught our attention in a very timely way and has held it for a while because it touches on the design and nature and purpose of the tabernacle in the wilderness, and Israel's camping around it. If you haven't seen Parts 4 and 5 of this video series, or if they are not already pretty fresh in mind, you may want to see them again.

(This post was formerly titled, "Part 24 - About the Schedule of the Pending Reset of Time")

We just published a fifth video about signs witnessed in connection with our receiving this insight into the schedule. This one features a sign witnessed on June 22, which is related to one from the day before. It involves another episode of the TV show, Jeremiah, from season 1, City of Roses. Watch the video and you'll see why this is a big deal, and worth the amount of time and effort we've put into this to give this its due. There's so much there it will take another video to finish covering the episode! You will see that what we showed about the Crossing Jordan episode was no fluke. The entire show secretly revolves around the season of Israel's time warp experience in the wilderness. We take the opportunity to expose their extensive use of space-time signaling, which includes Code 88. We also take the opportunity to explain why they do this, and what principles are being leveraged.

The signs that involve the show Jeremiah confirm what we've been learning about a biblical scenario that appears to be central to the pending reset of time - the ritual crossing of the Jordan across from Jericho. We started covering this scenario in the Parts 17 and 18 of this series on the schedule of the pending reset of time, and in the supplemental post, Secrets of The Crossing.

Numbers 9:15-23 and the Well-Oiled (with the spirit) Machine

While we continue to share about some of the signs that have attended the outpouring of insight about the schedule of the pending reset of time, the signs continue. You may have noticed that our ability to keep pace is, well, that's just not happening. Fortunately for all of us, that's not the point. We're just trying to honor the Lord's substantial provision with faithful stewardship. How amazingly good He is to us! Absolutely overwhelmingly good!

As I've been struggling to figure out how to share what was happening on June 22 in an adequate way, I've continued to learn more depth about one of the signs. As you must have noticed, one of the signs of the 21st required a substantial effort because that episode of Jeremiah really was very deep. The first sign of the 22nd involved another episode of that show (from season 1 - City of Roses), and it is also very deep. As part of the process I found myself drawn to a passage from the 9th chapter of Numbers. That chapter is very pertinent to Israel's crossing over the Jordan into the promised land - and if there ever was a passage that seemed excessively redundant, this would be one. I was compelled to analyze the structure. So, with some appending of commentary, here is some of the fruit of that endeavor.


You may find this comparison compelling. We see the machine-like operation of the disciplined and obedient children of Israel as they camped and set out from camp according to the commands of God expressed through the pillar of cloud by day and fire by night. There is a machine-like operation of the throne vehicle that was witnessed and recorded by the prophet Ezekiel. There are many comparisons invited.

Thank you so much for your support of us and this work! Blessings in Y'shua!

(This post was formerly titled, "Part 23 - About the Schedule of the Pending Reset of Time")

We just published a fourth video about signs witnessed in connection with our receiving this insight into the schedule. This one features the last sign we plan to feature from June 21, which involves a TV show called, Jeremiah, from 2004. This ties into what happened on the 22nd. That will probably be the subject of the next video.