Earlier today, we received an email from a reader passing along an interesting article discussing a group of doctors presenting information that contradicts just about everything that is being pushed by the mainstream media regarding the Covid19 situation. We have included the links to the original article as well as some supporting material below.
"Nobody Needs to Die" - Frontline Doctors Storm D.C. Claiming "Thousands of Doctors" are Being Silenced on Facts and Treatments for COVID
Censored Medical Doctor Publishes Results: 100% SARS-CoV-2 Cure Rate with No Drugs or Vaccines
Frontline Doctors on Censorship: We’re Coming After You Big Tech – We will Not be Silenced!
Less than 24 hours after the Frontline Doctors first press conference in Washington D.C. was censored and removed from Facebook, YouTube, and Twitter, and after having their own website knocked offline in an attempt to silence them, the doctors were back in front of the steps of the Supreme Court building today (Tuesday, July 28, 2020) for their second press conference, at great risk to their lives, their families, and their jobs, as they remained determined to bring the truth directly to the American people that a cure for COVID exists, and that the public does not need to cower in fear anymore. While the corporate media continues to blacklist the group of doctors and refuses to cover their press conferences, some hecklers showed up to try and drown out the speakers. The fact that these doctors are seeing a 100% cure rate for COVID patients is a message Big Pharma, Big Tech, and their political leaders do not want the public to hear. Because it would mean that their drugs and their coming vaccines are worthless and unnecessary. They do not want healthy Americans. They want sick Americans cowering in fear so they can control us for their own purposes. Dr. Richard Erso was one of the doctors who spoke today and he said: "We cannot let our patients die without treatment. And that's the major thing that's happened. We've been told to hide in our houses, wear a mask, and wait for a vaccine. That's not a strategy. We have a strategy. Hydroxychloroquine works. Withholding it from patients is shameful."
This is a link to a video on Bitchute with the doctors presenting their perspective and information on what is currently taking place.
https://www.bitchute.com/video/YmXmAy9CD5BL
The information warfare around this issue continues to escalate. Seek The Lord for discernment and insight as to what is legitimate and what is not.
Posted by Bob Schlenker at 5:49 PM 4 comments:

Having begun this series of videos with the account of our Lord's crucifixion and death, we continue with the subject of the handling of His body and eventual burial in the garden tomb. With regard to the thematic design, this portion of the account is the "B" of the larger AB/A'B' design. We close with Aaron's reading of a few selected passages of scripture.

We share our observations about the occult symbolism and ritual magick performed in this song and music video.

This viral production was released at midnight, or 12 am. This is evoking the time number 12. The date evokes the mastery of time number. [ July 24 or 7/24 and 2+4+7=13 ] The release happened at the Witching Hour, midnight, when ceremonial rituals often begin. And so it goes!

Curious about the pending reset of time? See The Pending Reset of Time - The Essential Guide
Posted by Bob Schlenker at 5:03 PM No comments:

Lots to see here! In this sixth part of the video series we continue decoding this Occult TV show. We feature a 666 Time Binding ritual from the pilot episode, which is just one of several that was found when we followed up on a revelation insight.

In this video, we feature the interactive presentation of a passage from John 19. We first released this featured passage as a independent presentation then, in June, we included it in a larger scale study, which you can find here: John 19:16b-20:31 - Crucifixion, Death, Burial and Resurrection

This work builds off the following 2 videos: 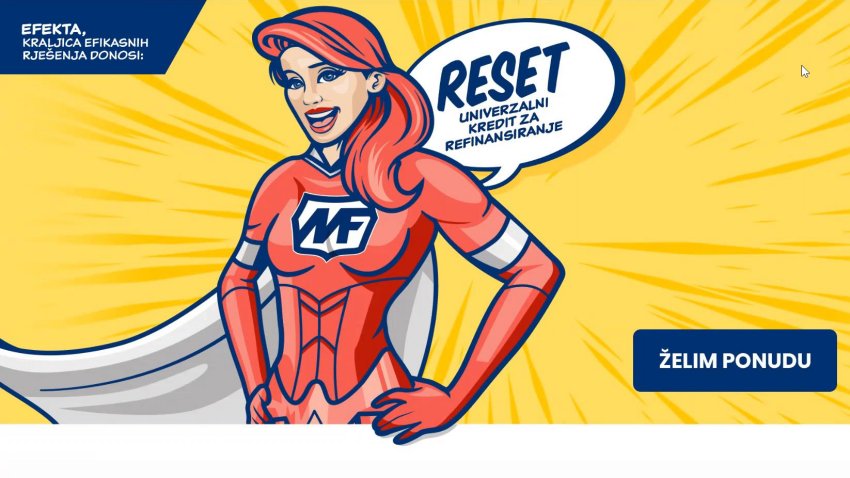 My landlord recently texted me about some repairs being done in the neighborhood by the Water Authority. He asked me not to use the water tomorrow between 9am and 4pm, to avoid drawing dirty water into the pipes. That text turned out to be a "heads up" notification for a collection of notable time signs! Taken individually, none of the items mean much - but meaning comes from context! It's all very encouraging! I share about these signs in a video. We close with Aaron sharing some refreshing passages of scripture.

Some links of interest:

In this eye-opening 5th installment, we feature some very compelling material!

How to stay in touch with The Open Scroll

This pair of ads was served up to me today in my Yahoo mail interface. 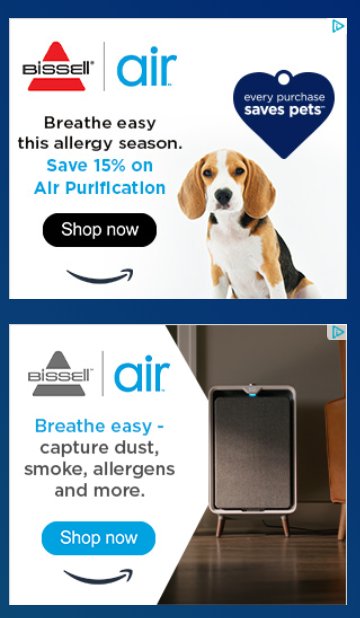 Do you see what I see? Donkey Love?

The following image of the ad pair has an instance in the logo called to attention by fading out the "nonessentials." I've done a similar calling out with 3 instances in the upper ad and 2 in the lower ad. We've been calling this kind of subliminal, "cross-line NLP clusters." The instance embedded in the line, "smoke, allergens" is a symmetrical pattern that definitely counts. Together with the two logos, I count 7 instances. Should we count the heart-as-butt image, which they even gave some flair by adding a hole? Sure! That's 8! 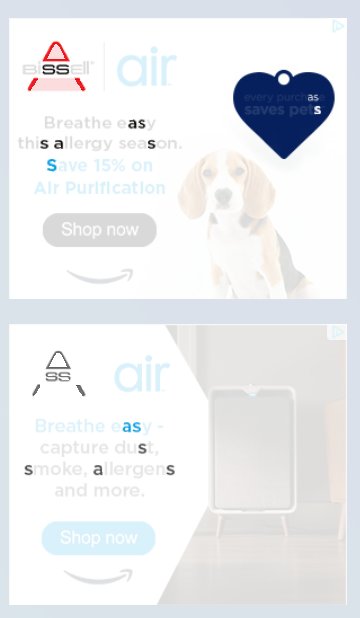 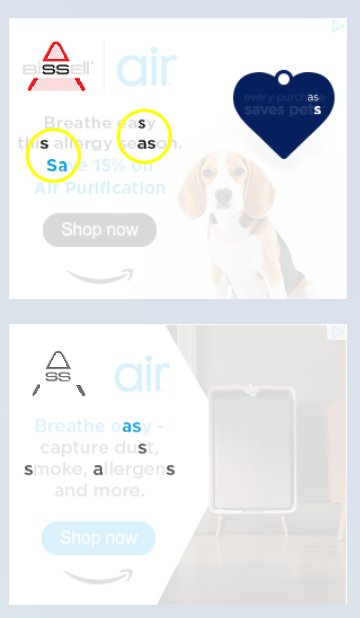 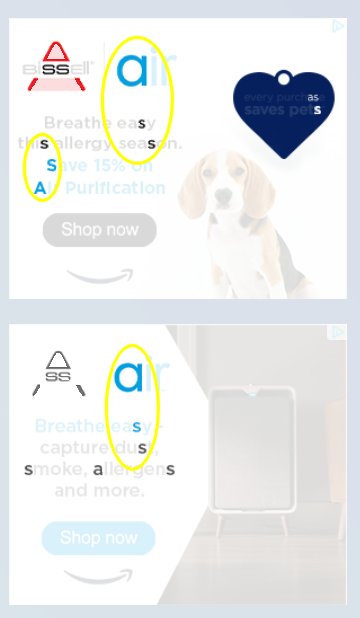 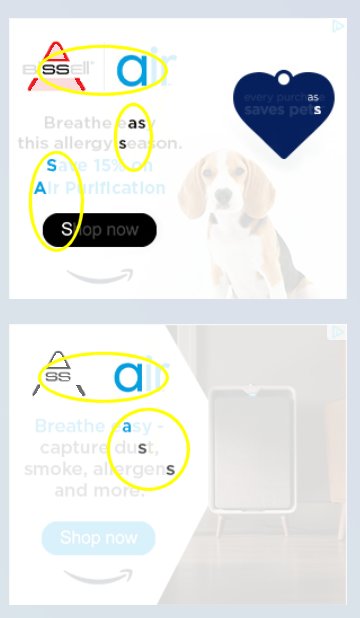 Eighteen instances! Coincidence? I think not. Plus, there's that sneaky anagram, "this" (this allergy season) Great Scott!

With all this going on, the dog just casually sits there on its butt, probably waiting to go sniff some Bissell air.

Mating all this with Amazon's iconic bent phallus you have to know the sodomites are having a chuckle over this promo.

Who would have thought they could get away with this kind of thing? Hmmmmm. Right. 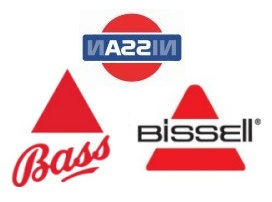 In this video we decode the rest of the scene we introduced in Part 1. We close with Aaron's reading of 2 Peter 1:1-11 and a review of how to stay abreast of what we publish across all our platforms.

It's not just that this line is heard in the show, it's WHEN it's heard that makes it notable - as the 13th minute has just ticked over to where 13 appears as the minutes digit of the counter. Thirteen signals the mastery of time. This is the evidence of a kind of magick. TIME-BINDING ritual.

The plot of this entire season of the show, which is claimed to be the final season, is about jumping through time at moments that are not of their own choosing. Their enemies are choosing, "Chronicoms" who have the ability to time their own jumps, exploiting time travel to manipulate the course of history and win their war. The number of episodes of this final season? Thirteen.

Think about it. Media presentations continue to dance all over this theme! Why? There really is a time war. We are living in the war zone and our familiar timeline has been devastated. It's a fight for survival. Does this have your attention? Are you engaged in the fight, beyond suffering as a victim of the carnage? This is bigger than any earthly threat, despite how real these are.


10 Finally, be strong in the Lord and in the strength of his might. 11 Put on the whole armor of God, that you may be able to stand against the schemes of the devil. 12 For we do not wrestle against flesh and blood, but against the rulers, against the authorities, against the cosmic powers over this present darkness, against the spiritual forces of evil in the heavenly places. 13 Therefore take up the whole armor of God, that you may be able to withstand in the evil day, and having done all, to stand firm. 14 Stand therefore, having fastened on the belt of truth, and having put on the breastplate of righteousness, 15 and, as shoes for your feet, having put on the readiness given by the gospel of peace. 16 In all circumstances take up the shield of faith, with which you can extinguish all the flaming darts of the evil one; 17 and take the helmet of salvation, and the sword of the Spirit, which is the word of God, 18 praying at all times in the Spirit, with all prayer and supplication. To that end, keep alert with all perseverance, making supplication for all the saints, ~ Ephesiahs 6:10-18
Posted by Bob Schlenker at 11:51 AM 2 comments:

In this video we decode Occult symbolism and unpack the magic ritual from the scene we introduced in Part 1. We cover about half of what we noted about it, leaving the balance for another video - Lord willing. AND, we close it out with a preaching segment from Derek Prince.

Links mentioned in this video:

Derek Prince is teaching about the difference between The Beast and his nature compared to the nature of Jesus as The Lamb. (The segment we feature extends from 9:07 to 12:40)

Curious about the pending reset of time? See The Pending Reset of Time - The Essential Guide
Posted by Bob Schlenker at 5:30 PM No comments: