We've been giving attention to the film series of Back to the Future since around Back to the Future Day, Oct. 21, 2015. Like with some of the other films, like Rango, Iron Giant and The Penitent Man, there are good reasons why. While the film never held much interest for some, for others it was genuinely life-changing. A documentary, which was released on Back to the Future Day, features most of the original people involved with the films, including Spielberg. It offers some perspective on the high level of enduring influence the series has had. You may be quite surprised! It's presently streaming on Netflix (Back in Time (2015) - a documentary by director Jason Aron), and you can also rent it on Amazon Video (for 4.99).

It was recently announced that the famous car that the time machine was based on is planned for production. The DeLorean From 'Back to the Future' Is Back in the Future

In Parts 5 and 6 of the ongoing video series decoding the BttF films, we pointed out how Nazi science, mind control programmers, historical Nazi characters and neo-nazi codes and sentiments are found throughout the film. These are done so expertly that it's still quite secretive. Who else knows these things I can't say, but the reality of their presence is not hard to discern when the meanings of the symbols are understood. 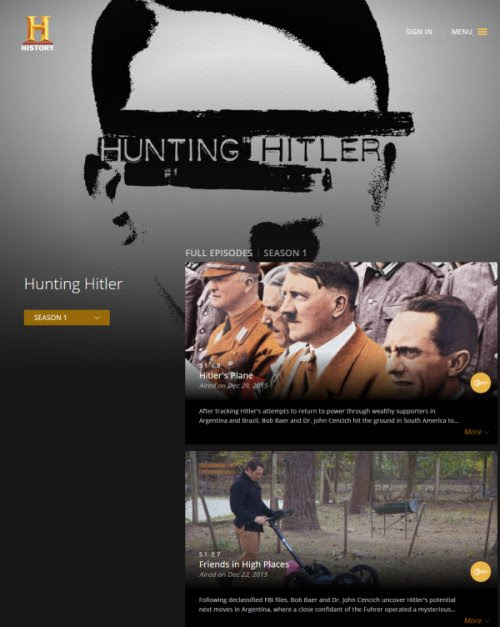 The fact that we've been lied to about Nazi science and the status of high ranking party officials is beginning to get more publicity. A new edition of Hitler's, Mein Kampf, has been published in Germany for the first time in 70 years - and it was a sell out!

“Hunting Hitler” - on the History Channel

Note: Hunting Hitler - HH - Heil Hitler - H, is 8th letter, so HH is also 88. The title, Hunting Hitler, has 13 letters plus one space, so in total there are 14 character positions in the string. This title provides a numbering of 14 and 88, which is the same Neo-Nazi White Supremacist code embedded so redundantly in, Back to the Future. Here's the post that has links to the video where I expose that embedding: Back to the Future - Neo-Nazi Racism and Dark Secrets Encoded in the Time and Speed
Posted by Bob Schlenker at 12:48 PM 16 comments:

Here's yet another mass media flip and spin on the nature of our present situation, as we await the appointed reset of time back into the past. DC's new Legends of Tomorrow show is kind of a rip-off of Marvel's Avengers, spinning characters off The CW network's popular Arrow and Flash live-action comic versions.

“As a time master of long standing you seem to forget, our responsibility is to protect the timeline, not humanity. You wish to engage in the very sort of manipulation time that we are sworn to prevent.”

Rip Hunter, rogue Time Master, asks for a single time ship because he wants to protect the world from the devestation being caused by an immortal from ancient Egypt, Vandal Savage. The time ship is a time machine/transport vehicle with an AI personality named Gideon as crew. A time ark of sorts. Apparently denied by the council, Rip goes rogue and takes a time ship and goes to assemble a select team. The numbering of 8 select individuals that he gets for his team invites comparison to the mission and ark that saved 8 souls through the flood - with water as time. As it was in the days of Noah... and that scripture has to do with time, with rightly knowing the time. (As I've shown here: Will No One Know the Day?) The name, Rip Hunter suggests a hunter of rips or tears in the "loom of fate" or fabric of space-time.
Posted by Bob Schlenker at 7:35 PM 19 comments:

As I'm returning to a focus on blogging and video production, I'm also wrapping up a few other projects. I've given theOpenScroll.com some needed attention, adding a couple pages, updating the design to add more width and to also make it more mobile- friendly.

THE HARNESS OF THE LORD by Bill Britton

Have you been watching Heroes Reborn? ( see post here for a decoding of the ad imagery )The plot is similar to that of Wayward Pines. The finale is this week. Special wristwatches have been used as kind of a ticket, to permit individuals in a group to be sent into the future. For salvation of the individual to preserve the human race. The premise is familiar, right? In the latest episode they showed an accident where a car went off the road and tumbled into a river. The watches he was carrying fell out and were seen floating away. In the water. Down the river. Watches - time. Water as time. The River of time. That was episode 12. A time number. There is a character they refer to as the master of space and time, and he has been manipulated, co-opted, to carry out an agenda that will only save a select group instead of the entire population of the planet. The season finale is called, Project Reborn. Episode 13. The number of the mastery of time or space-time. That's what's going to be central to the episode.
Posted by Bob Schlenker at 2:32 PM 18 comments:

I woke up on the morning of 12/4 knowing that I needed to relocate and began making effort toward that end. As a “content producer” I've been largely sidelined since then. My focus has been on securing a new home, and while that hasn't fully occupied my time, I've been strangely unable to work on the in-progress “Back to the Future” video series, and with a couple exceptions, unable to continue my customary routine. I haven't had any explanation for it, but now more insight is coming.

Today, I'm mostly settled in and am starting to pick up where I left off. Today is the 40th day in the count from 12/4, so it's another timed sign. The number 40 generally indicates a trial period as part of a major transition, like the 40 years Israel spent in the wilderness and the 40 days Y'shua spent in the wilderness. Also factoring into this matter is today's date, 1/13. The number 13 has to do with the mastery of time, and January is the month dedicated to Janus, the Roman god of time who looks both into the future and the past at once. It is notable that the 13th day of the first month is one that I've written about at great length because it is so critically important. Today it is the 13th day of the 1st month on the pagan Gregorian calendar accounting, so this is merely for a sign. On the Lord's calendar (Hebrew) the first month is in the Spring of the year, and that's when the 13th day marks the anniversary of a special day of infamy, when the lawless one will be revealed. If you've been paying attention, you know that time will be reset, to repeat a season of the recent past, with the necessary result that prophecy will unfold on the appointed schedule, and the fulfillment of the 13th day of the 1st month will be in 2015.

Aaron is a witness together with me of these things, and he has been led to keep records and counts. He has also been mostly on pause during this transition. None of these things I'm reporting here have been planned or manipulated to work out on any schedule. We're just watching and trying to understand what the Lord would have us to know about our times and His ways with us.

Blessings in Y'shua, and thanks again for all your support and encouragement!

Moved - and settling in!

Hi everybody. I've moved to Greensburg PA and am settling in. Aaron is still in Pittsburgh and he's actually getting settled in too, moving within the house. Thanks so much for your support during this transition. Our God is so good to us, my dear brothers and sisters! Do you really know it?

Just like how the address of the place I lived when I first moved to Pittsburgh in 2011 was prophetic so it appears that this one is too . It's not personal but on a corporate level. My former Bryn Mawr address testified of National Judgment and this new one seems to speak of the consequences. I'm living in a small house on an alley, behind a big house on the front of the street. My address is Alexander Ave REAR. Alexander the Great was associated with Apollo, aka Horus, so the sodomite theme or location of Sodom is suggested.

Aaron discovered the 1200 day count, and he noted also that my departure came exactly 1260 days after the opening of the London Olympics. That's when he heard the ringing of the large bell (of Caliban) that signaled the start of the Games, and in the spirit heard, “It has begun!” We wondered what the Lord meant by that, because you don't need revelation to know the Games had begun. Some spiritual season began, and we continue to watch as per the Lord's command to watch to gain what insight the Lord might bring forth.