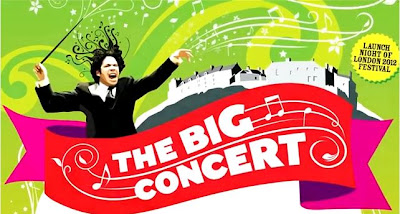 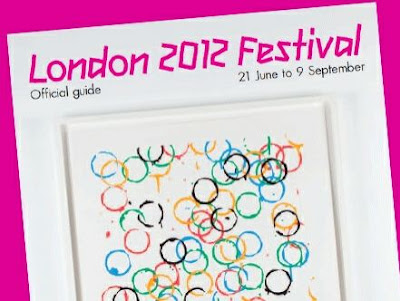 Why is it that it is "really important" for everybody to participate in what is going on to promote these Olympic Games? Why is Ruth McKenzie and those whom she represents so adamant about wanting people to "take part" in the activities? I believe part of the answer lies within her own quote as she pointed out that "this is the true spirit of the Cultural Olympiad". The vast majority of the activities planned are interactive in nature, requiring those involved to participate in a fashion that more often than not requires physical exertion and an expenditure of energy.

Those who have designed these events in the service of the evil entities whom they serve are well aware of the massive energy needed to attend the mega-ritual event of the Opening Ceremony. The Cultural Olympiad that has been going on since 2008 has served as a means of harvesting and harnessing that needed energy through the participation of the willing and the ignorant. The London 2012 Festival is the final ramp-up and exponential acceleration of this ritual layering in preparation for the mega ritual Opening Ceremony taking place on July 27, the day known by Luciferians as the day of the Grand Climax.

It must be noted that the official opening of the London 2012 Festival begins on June 21, 2012 which occurs on the Summer Solstice. These days mean something and are of great import to those "in the know" that are responsible for orchestrating these events. This is ritual magick at its highest, and most lethal, form. Even the official guide proclaims the curse that is being levied against those participating in these events.

The official guide on page 7 has the following:

The official opening event to mark the beginning of the London 2012 Festival is "The Big Concert". The concert features Gustavo Dudamel and the Simón Bolívar Symphony Orchestra of Venezuela. According to the official London 2012 Festival web site, The Big Concert features a full performance by the Simón Bolívar Symphony Orchestra with a special guest appearance by Big Noise. The Big Concert brings this charismatic conductor and his ebullient 200-strong orchestra to the Scottish community of Raploch, Stirling, where they will perform an outdoor concert set against the backdrop of Stirling Castle.

After reading this description of the event the first thing I did was investigate Gustavo Dudamel's official website, which had some interesting information about the exact nature of the program set to mark the official opening of the Festival.

"The programs feature Beethoven's iconic Symphony No. 3, "Eroica," as well as works by Britten, Benzecry, and Strauss. You can watch these performances live online from anywhere in the world via the Guardian." It is important to note the intent to attract, influence, and curse as many people as possible via the online option by broadcasting this event to a global audience. These folks know exactly what they are doing and they are quite good at it.

Beethoven's Symphony No.3, "Eroica", which means "heroic," was originally written for and dedicated to Napoleon Bonaparte, who was a clear and definitive model of Antichrist:

"Beethoven had originally conceived of dedicating the symphony to Napoleon Bonaparte. The biographer Maynard Solomon relates that Beethoven admired the ideals of the French Revolution, and viewed Napoleon as their embodiment. In the autumn the composer began to have second thoughts about that dedication. It would have deprived him of a fee that he would receive if he instead dedicated the symphony to Prince Franz Joseph Maximillian Lobkowitz. Nevertheless, he still gave the work the title of Bonaparte." ~ Wikipedia Quote

"The French Revolution (French: Révolution française; 1789–1799), was a period of radical social and political upheaval in France that had a major impact on France and indeed all of Europe. The absolute monarchy that had ruled France for centuries collapsed in three years. French society underwent an epic transformation, as feudal, aristocratic and religious privileges evaporated under a sustained assault from radical left-wing political groups, masses on the streets, and peasants in the countryside. Old ideas about tradition and hierarchy – of monarchy, aristocracy, and religious authority – were abruptly overthrown by new Enlightenment principles of equality, citizenship and inalienable rights." Wikipedia Quote

Apparently Beethoven exalted the radical social and political upheaval leading to the absolute collapse of society and the overthrow of religious authority in lieu of humanistic philosophy. I believe that it says a great deal that this was the music chosen to celebrate the opening of the London 2012 Festival.

Beethoven's Symphony No. 3 contains other elements that further demonstrate the truly ominous nature of what is about to transpire tomorrow in Raploch. The Symphony is comprised of four movements and according to Wikipedia the first movement "like the rest of the piece, is characterized by remarkable harmonic and rhythmic tension due to dissonant chords and long passages of syncopated rhythm."

If you are not familiar with the techniques used in mind-control and programming, I will give you a hint and tell you that dissonant chords play a large role. Modern Rock music, which a large number of folks recognize as "evil" uses these very same dissonant chords and syncopated rhythms to achieve their mind-control aims.

"Also, the musical tones (chords) used along with those lyrics are dissonant in modern music, making certain automatic emotions happen in the mind that attaches to the lyric message. This can cause emotional stress in a person, which is "resolved" in a song's ending, with a "happy" message as the resolution of the song ... this IS how PROGRAMMING WORKS in most mind control victims." (How Mind Control Works in Rock Music)

Perhaps you have been taught that modern music is evil and bad, but classical music is good and pure. Wrong. If you are not yet convinced of the evil intent behind the music and its use in this opening event, please allow me to share with you a quote from Beethoven himself in regards to his views and thoughts about music and his role in delivering it to the masses.

"Music is a higher revelation than all wisdom and philosophy, it is the wine of a new procreation, and I am Bacchus who presses out this glorious wine for men and makes them drunk with the spirit."
-- Ludwig van Beethoven, quoted in Marion M Scott, Beethoven (1934) 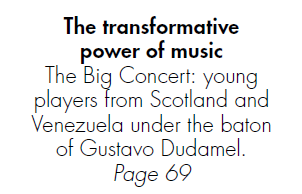 The official Festival guide lists this event as "The transformative power of music". In light of the aforementioned insight into the music chosen for the event, what do you think they mean when they use the word transformative? Of this I can assure you, nothing good! The fact that the listing of this event is featured on page 69 of the official guide is certainly no coincidence. The listing of this event on page 69 further informs us of the intended transformation that they have in mind, which is the triple-helix DNA modification of God's created Adamic-Mankind. Adamic-Mankind possesses 46 chromosomes within the double-helix DNA formation, the addition of 23 extra chromosomes provided by the third strand of DNA forever transforms Adamic-Mankind into Satanic-Mankind with a triple-helix DNA structure containing 69 chromosomes!

Along with the date and the music chosen for the event, the location is of specific interest and I believe is the most revealing of all of the elements. Like me, you may be wondering why the London 2012 Festival chose Raploch, Stirling and the backdrop of Stirling castle as the locale for this event. For those of you unaware, Stirling was the location where England suffered a humiliating defeat at the hands of William Wallace in 1297. Rather odd that this was the location selected to mark the event of the London Festival, no?

I was a bit confused at first myself, until I visited the official Raploch web site and found this piece of information: The first mention of the place known as Raploch was recorded during the reign of James I in the 15th century. The site had witnessed several notable moments in Scottish history, the most significant on 11 September 1297, when a Scottish army, led by William Wallace and Andrew Moray, defeated the English army led by the Earl of Surrey at Stirling Bridge.

The site chosen for "The Big Concert" has "several notable" moments, but the most significant occurred on September 11, 1297. Yes, another 9-11 signal! It is also worth noting that 1297 is 715 years from 2012, which is a "13" signal of "7+1+5=13". William Wallace led a revolution against English authority, and is yet another piece of "The Big Concert" puzzle that reveals an intense undercurrent of revolution and upheaval.

There is yet one more insidious layer to all of this that must be addressed. For those of you who have been following the blog you will be familiar with the topic of disembowelment and its relation to mind-control and SRA/DID programming. The story of William Wallace is one with a gruesome end, and one that goes far beyond coincidence in light of the entire context of date, music, and location coming together to mark the opening of the London 2012 Festival.

In accordance with the predetermined result of the case, Wallace was found guilty and condemned to death with the sentence being carried out on the same day in the most inhumane way possible. He was dragged through the streets of London to a gallows erected in Elms in Smithfield. Where after being hanged for a short time he was taken down still breathing and his bowels torn out and burned. His head was then struck off, and his body divided into quarters, the punishment known as 'hanged, drawn and quartered'. His head was placed on a pole on London Bridge, his right arm above the bridge in Newcastle, his left arm was sent to Berwick, his right foot and limb to Perth and his left quarter to Aberdeen where it was buried in what is now the wall at St. Machars Cathedral. He bore his fate with a magnanimity that secured the admiration even of his enemies, and his name will be held in everlasting honor by the truehearted friends of freedom in every age and country. ~ William Wallace

The Big Concert will be transformative power of music indeed, and they will most certainly be making a "Big Noise"; however, when confronted with the question of what kind of transformation and what kind of noise I must offer the same conclusion previously put forth. Nothing good!

by Aaron Hermann
Posted by Bob Schlenker at 6:22 AM