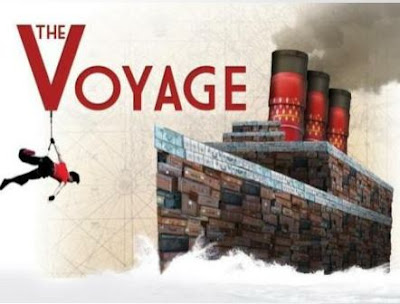 The London 2012 Festival is now fully underway with the completion of "The Big Concert" and several other events marking the beginning of the festival.  One of the other major events selected to kick off the festival that has captured my attention is the event called "The Voyage".

While "The Big Concert" and "The Voyage" are two separate and distinct events, they are both part of the bigger picture and speak to the overall aim of this festival and the mega-ritual opening ceremony of the Olympic Games.

The description of "The Voyage" provided by the official London 2012 Festival web site truly says it all:

"An enormous ship sails into the centre of Victoria Square, Birmingham, docking itself beside the city’s Town Hall. High above the people who gather to look at this marvel, dancers and aerialists appear in the ship’s rigging – the voyage begins.

Professional dancers and aerialists join forces with a huge amateur choir, live musicians and more than 140 community performers to transform the Square and tell the story. Watch the action unfold onboard the ship and be caught up in the atmosphere on the ground, where seagulls swoop and travelers prepare to embark on their journey. The ship sets sail, the Town Hall is transformed by spectacular projected imagery and the city’s skyline becomes a dream of undiscovered worlds."

If you happened to miss the most telling aspects of this description, I can assure you that the transformation of the square involved in telling the story that leads to observers being "caught up in the atmosphere" is most definitely not a good thing.  The entire atmospheric transformation serves as a means of magickal preparation needed to invoke and evoke the necessary supernatural forces needed for the transformation of those in attendance and participating in the event.

The transformation of the square sets the supernatural stage as necessary gateways are opened "and travelers are prepared to embark on their journey".  The question remains, where are these people being taken to?  We do not have to wait long for the answer. In the very next sentence we are told that the town square is transformed and "the city's skyline becomes a dream of undiscovered worlds".  Is it me, or does this entire event scream of a supernatural, magickal dimensional transport ritual?

Just in case you are not yet convinced, let’s take a look at two quotes given by critics on the official event page:

'The company blasts physical theatre into a new and triumphant dimension.' ~ The Sun Herald, Australia, on Legs On The Wall

'A fascinating experience... an assault on the sense, amazing.' ~ Manchester Evening News on Motionhouse

The NLP taking place in these two quotes is rather unmistakable.  The critic from The Sun Herald tells us that the company is blasting things into a new and triumphant dimension.  Sure, there is the plausible deniability option and you could believe that this is an innocent review of an innocent production.  You could even apply that same fallacious perspective to the critic who described the event as "an assault on the sense"; however, a rose by any other name is...well you get the point.

You will notice that the "V" in "The Voyage" is singled out for our attention and for a very specific and nefarious purpose.  You will also notice that "the" is written inside the "v" so it is pointing out that it is not just a "v" but THE "V".  The V in this image is that of the birthing canal of the goddess Isis, revered as the queen of Heaven.

Some will claim that the man hanging from the "v" is merely representing the nature of the theatrical presentation; however, those of us with eyes to see are aware of something far more being signaled here.  The "man" hanging from THE "V" is none other than the hybrid god-man Horus being birthed from Isis' womb.  The cable is the umbilical cord and lifeline from mother Isis to son Horus.

Also of great interest is the fact that the word voyage is marked at the halfway point by the front of the ship splitting the word in half and highlighting the "age" in voyage.  Those of you familiar with the work of the Vigilant Citizen and the Secret Arcana web sites will understand that this entire image is referring to what infamous British Satanist Aleister Crowley referred to as the Aeon of Horus!

The entire London 2012 Festival, the subsequent mega-ritual opening ceremony of the Olympic Games, and the Games themselves are all part of the main agenda of ushering in the age of Antichrist...the Aeon of Horus.

The "V" in voyage is really "v" for vagina, Isis' birth canal. While the man hanging from "the v"is one depiction of the birthing and return of Horus, there is another depiction layered that must be addressed. The graphical depiction of the ship is also referencing the arrival of Horus as it leverages the idiom of one's "ship coming in". The ship itself is Horus, making his voyage to this dimension. The visible element of the animating force of any steamship are the smoke stacks. In this graphical representation, we see three smokestacks signaling the the triple-helix DNA nature of Horus' body.

You will notice that the ship is comprised of various pieces of luggage, which is yet another subtle layer of the depiction of Horus as one who is bringing his baggage with him. The baggage references the issues he has going back to the days of Noah when his beloved Nephilim siblings were purged from the face of the earth. Horus is making his dimesional voyage on the waves of the counter-flood coming forth, and he will most certainly be bringing all of his baggage with him.

By Aaron Hermann
Posted by Bob Schlenker at 8:21 AM