The imagery that finally prompted a long anticipated return to the "i" of Horus series belongs to the now defunct Burroughs Corporation. The magazine ad from the late 60s you see here came to my attention a couple days ago, linked from RaidersNewsNetwork. (IEET - “To Prevail” “Open the Future”, Jamais Cascio's essay for Joel Garreau’s Prevail Project) This ad picks up the phallic eye of Horus theme of several of the latter posts in this long running series. 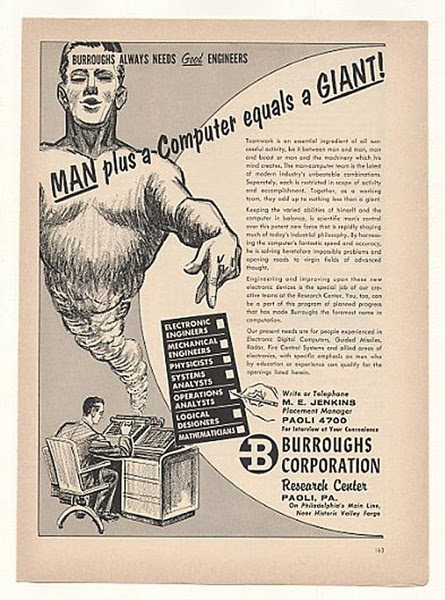 (See Part 40 - See, it's the "i" of Horus! Red Bull Gives You Wings) It also comes now very appropriately as yet another item in a remarkable sequence illustrating the prophesied release of giants bound in the earth, imprisoned from the time when they were judged in connection with the great evil in the days of Noah. While I'm not quite done squeezing Rango for everything the Lord has for us, the time has come to resume the revelation of the very significant broadcasting of antichrist delusion through the eye of Horus “graven image” portal.

The ad's equation is simple. Man plus a Computer equals a GIANT! When taken literally, it's a very elegant declaration of the essential role some next-gen PositiveId transducer implant will play in facilitating the post-human transformation of man. It's the formula for the mark of the Beast. Take one Adamic man. Add the right computer chip. Presto. Hocus Pocus focus. Outcome? Post-human Giant of the god-man variety!

Is this what those responsible for the ad really intended to say? Whether the folks involved actually knew what they were producing, I can't say, although it seems likely. What I can say with confidence is what it means because the attending copy, symbols and layout attest to the same! I assembled a collection of images to illustrate some of what I perceive. 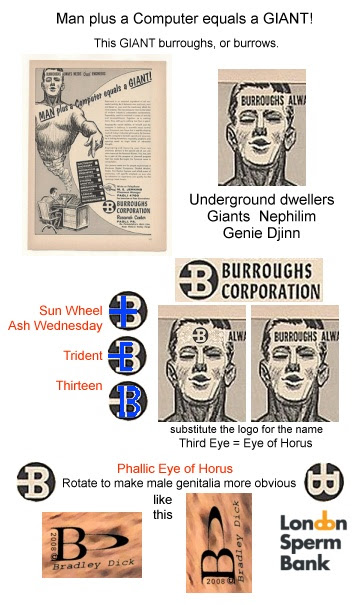 Notice how the company name appears on the giant's forehead like a label. What kind of giant Burroughs, or, substituting the obvious homonym, burrows? Burrow: “A hole or tunnel dug in the ground by a small animal, such as a rabbit or mole, for habitation or refuge.” Have you been following this blog? How about Horim? How about Rephaim? Djinn. The giants of Genesis 6. If you swap the logo for the name it represents, the giant looks like he just left Ash Wednesday's Mass. Let me just state the obvious: The B stands for Beast.


16) And he causes all, the small and the great, and the rich and the poor, and the free men and the slaves, to be given a mark on their right hand or on their forehead,
17) and he provides that no one will be able to buy or to sell, except the one who has the mark, either the name of the beast or the number of his name.
Revelation 13:16-17

As for buying and selling, it was the Burrows Corporation's business to support those very activities by facilitating accounting, producing adding machines, and then programmable ledgers and finally computers. NCR was a competitor. IBM was another. 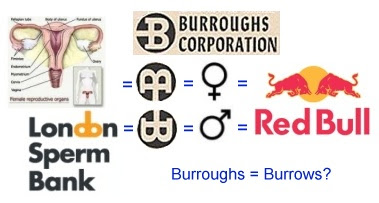 The Burrows, uh - Burroughs, logo is a pretty clever device. Embedded within it are the solar wheel cross, a trident and the number 13. Rotated, it's the reproductive imagery of both male and female genitalia. Burrows. Sexual innuendo. Clever, very clever indeed!

The Giant most closely resembles the fashionable form of a hovering genie with torso tapering into a vortex of smoky ectoplasmic - whatever.

He has the facial expression and awkward gesture of the sci-fi standard zombie, with a head shaped like Frankenstein's monster. The graphic charcoal stroked technique makes him resemble a hairy shape-shifting werewolf. His physique makes him look like Superman. He's that kind of giant, a composite über-monster. Notice, too, how his left eye is darker than his right, identifying him with Harmerty. Horus, who rules with two eyes.

The tip-off that he's the Sun god is the arc separating the ad copy from the shaded man-computer-giant area. The light arc - that's the Sun. The Giant is presented as the interface between the light and dark, like the Beast will be the divine Sun god interface with man's natural world. Observe how the main blurb connects the Man on the form of the man with Giant on the form of the Sun.

See, too, how the arc passes through the letter m in computer, calling out the m (Like the McDonalds golden arches) which is the thirteenth letter of the alphabet. If you want to get more granular, the arc actually passes through the m and the p. m=13 and p=16 Revelation 13:16

Want to see a real sales job? The ad calls out the word “good” centrally and up top, with italics and underlining and a distinctive typeface. This subtly tags everything in sight. Good? Don't buy it. There's nothing good there.

What is truly good is the Lord Y'shua, who opens our eyes and sets us free!
Posted by Bob Schlenker at 2:41 PM