In the news: Pope Continues Global “Green” Crusade for World Government
"So the Pope wants a strengthened United Nations to constitute a "World Political Authority" that will have the "teeth" to enforce its will on the nations of the world? Will somebody in the media explain why this is not global tyranny? This makes the controversy over Interpol look like peanuts."

PJTV: The Power and Danger of Iconography - a video that reveals the power of Obama's branding.

The "Threshold" poster shows the triskelion fractal through which light pours into the dark scene. 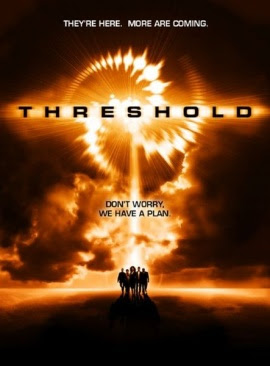 The poster can be understood by identifying the symbolic elements and interpreting them according to the knowledge of the great secret of the ages that I've been presenting in this blog.

The light pouring through the triskelion represents the divine spiritual illumination that attends the triple helix DNA transformation. This backlighting is common to all the title imagery used for the show. You can see a beam of light projecting from the eye or center of the rotationally symmetrical figure that illuminates the people. The setting is that of heaven above and earth below, with the illumined beings spanning heaven and earth by means of their "completed" DNA ladder. This presents a powerful view of the ascension of man, the anticipated joining with the divine light of the heavenly being. This imagery alludes to the pillar of cloud by day and pillar of fire by night of Israel's season of wandering in the wilderness with Moses, an angelic presence that was a continual reminder of the presence of their God and which they were required to follow. The title graphic is overlaid on top of the triskelion with the serpentine letter "S" positioned at the eye. The "Threshold" version is a lie. The serpent's plan is a counterfeit, an antichrist agenda; one that will generate supermen beasts after the image of this being who was cursed above every beast of the field.

The marketing image for "The Complete Series" is similar but shows five rays of light illuminating the individuals. The fractal triskelion is featured very dramatically in a number of ways during the show. It's often animated, sometimes rotating, being formed by living or dynamic elements such as fish or giant cockroaches, the spilled blood of humans who have been affected by the alien "signal," and even laptop screens and other monitor screens. When in motion, the individual circles rotate clockwise. Most instances exhibit a clockwise rotation but I've noticed that there are a few times it appears counter-clockwise. Functioning as something of the "calling card" of the aliens, it is the sign of the presence of the transformational influence. This function of the triskelion fractal and its role in the "Threshold" plot should speak to you of the function of occult symbols in general and of the triskelion kind in specific.

"To cast a spell is to project energy through a symbol." (Starhawk - from "The Spiral Dance" (popular manual for witchcraft))

The triskelion symbol and others like it are potentially demonic portals, used by occult practioners as directed by their manuals and familiar spirits in magic ritual. These invoke demons, casting spells. The transformation into "improved" triple helix DNA beings in the "Threshold" show doesn't come by way of the triskelion fractal but by an audio signal, the fractal being merely a sign of the alien transforming presence. In reality, the symbol itself is an important part of the transforming process. It is actively preparing mankind for transformation, powerfully projecting a supernatural influence that will yield fit and willing hosts for the antichrist entities being invoked. We are being prepared for the mark of the beast. 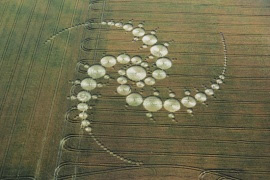 After the show was broadcast on CBS and canceled, all 13 episodes were picked up and shown on the Sci-Fi network around the globe.

The image presented as the signal fractal had appeared in a field of wheat in the U.K. about 9 years prior to the broadcast. Compare these two images. The darker shadowy version is used on the show as a presentation image between segments of the episodes.

The crop circle that appeared on July 29, 1996 near Windmill Hill near Yatesbury, Wiltshire, by reason of many remarkable features had  convinced those who investigated that it was not a hoax. Access to the archive at cropcircleconnector.com is for members only so I can't link you to it. I can tell you that one of the 194 distinct circles involved has a letter "S" marked in it, and that circle is reported to have a "beautiful reversing swirl."

The design chosen for Threshold was sourced from the crop sign. The sign maker is behind Threshold. The serpent's triple helix scheme is being implemented. All the media at his disposal is being leveraged. For more insight, see Olympic Ceremony Symbolism: Parts Five and Six.
Posted by Bob Schlenker at 11:05 AM